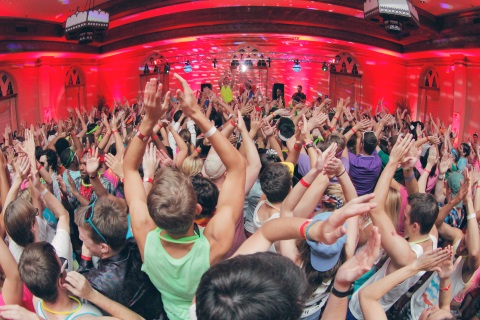 Unless you were a cool kid in high school, you probably never attended a “party” before (or maybe that’s just me because I was somewhat of a nerd in high school). In any case, whatever sort of background you have when it comes to high school parties, you can basically just throw that all out the window. Because college parties are a completely different animal.

It starts with the sheer size of the parties. While any given high school party can potentially have half of the school attending, that may only amount to a few hundred people in the absolute best case (i.e. assuming a really large high school). However, most times high school parties are well less than a hundred people. On the flip side though, college parties hit hundreds of people easily (and potentially going into the thousands depending on what college you go to). Simply looking at the size of an average college to the size of an average high school, you can see a huge discrepancy in the student population, and that directly translates to the college party scene.

Fraternities in particular (although to a certain extent sororities as well) take parties to an entirely new level, because they naturally gather up like-minded people who often want to experience the best that college has to offer when it comes to the social scene. In other words, when you have guys who love to party organizing a party, you know it will be a great time, and that is exactly what happens every time a frat throws a party. And the best thing about college is that with so many frats, there are parties just about every weekend (on Fridays and Saturdays).

To be honest, those are the two big reasons that college parties are so much better than high school parties. But there are also a few subtle differences that help improve the overall college party scene. The first is alcohol. Yes, a lot of high school parties find ways of getting alcohol on their own, but at college parties, there is much less resistance when it comes to drinking alcohol freely. Although not every college student is legally allowed to drink, a lot of schools simply turn a blind eye (whether that is a good thing or a bad thing is up to you to determine for yourself), allowing even freshman to enjoy alcohol freely.

Another subtle fact about college life that influences college parties is the independence that comes with going to college. When in high school, even if you were to go to a party, you are often limited by either an outright curfew, or at the very least a general expectation of getting back home at a reasonable hour, lest you get into trouble with your parents. However, in college, there is no need to worry about any of that, meaning you can party as late as you want to. You can go well past midnight and not have to worry about getting back to your dorm at all. Having that freedom not only means more time to party, but the ability to let loose and really enjoy the party to the fullest.

So that’s the college party scene in a nutshell. On all accounts, college parties are significantly better than high school parties, which is why they are one of the most sought-after aspects of college for prospective students (and for those who really want the best of the best when it comes to the party scene, be sure to check out this list of the top party schools). Once you have your very first college party for yourself, you’ll immediately see why that is the case for yourself. That I can assure you.